The Search For WondLa

When a marauder destroys the underground sanctuary that Eva Nine was raised in by the robot Muthr, the twelve-year-year-old girl is forced to flee aboveground. Eva Nine is searching for anyone else like her, for she knows that other humans exist, because of an item she treasures—a scrap of cardboard on which is depicted a young girl, an adult, and a robot, with the strange word, “WondLa.” Tony DiTerlizzi honors traditional children’s literature in this totally original space age adventure: one that is as complex as an alien planet, but as simple as a child’s wish for a place to belong. 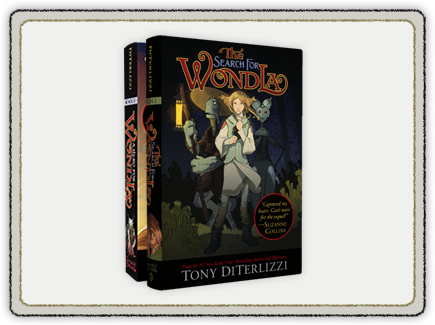 Tony on The BBC

TERI HATCHER has received Golden Globe and Screen Actors Guild awards for her role as Susan on Desperate Housewives, and also starred as Lois on the hit series Lois and Clark. She has appeared in the films The Big Picture, Spy Kids, Soapdish, and Tomorrow Never Dies, and gave voice to all three mothers in the Oscar-nominated, animated film Coraline. She voices a pirate on Disney’s Jake and the Neverland Pirates, and lent her voice to the film Planes. She is the author of the New York Times bestseller Burnt Toast and Other Philosophies of Life.